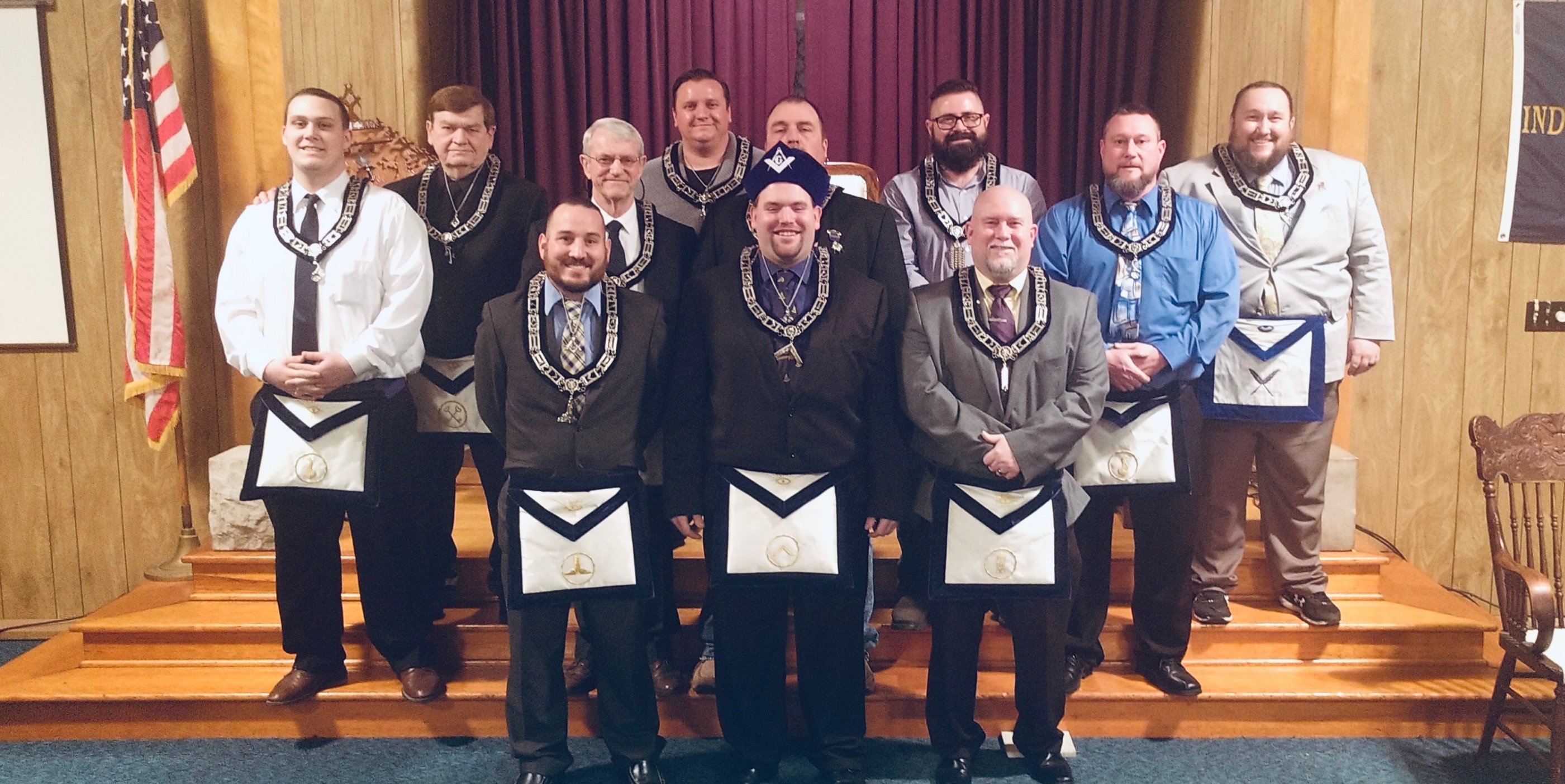 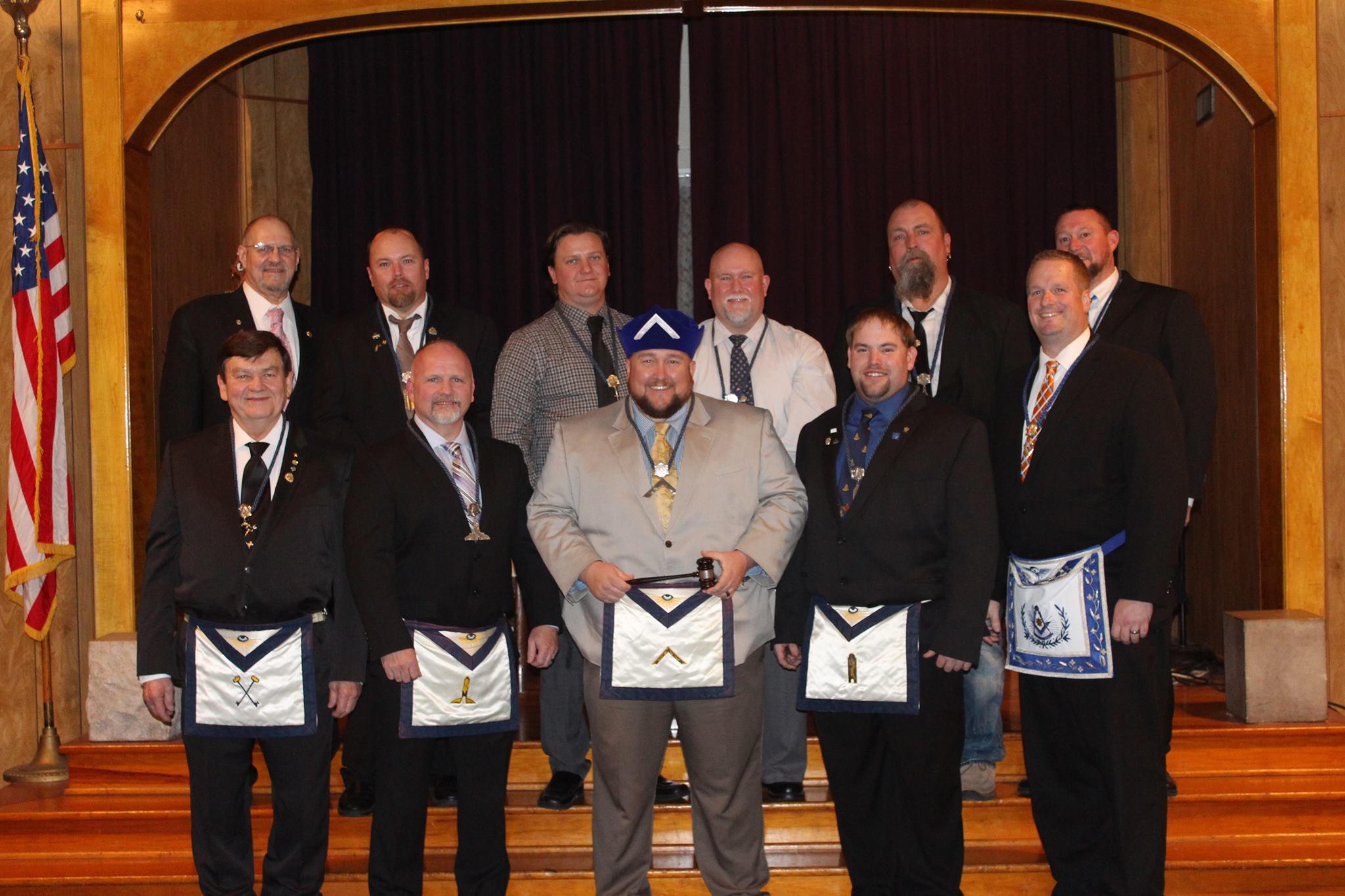 Officers are elected annually by the members of the lodge, although a few are appointed by the Worshipful Master. The names and duties of the officers are mostly taken from very old customs practiced by the medieval stonemasons' guilds, where Freemasonry originated.

In England in the 1400s, under the reign of King Edward III, local (or what we now call municipal) governments grew out of the merchant and craft industries of the towns. The guilds had lots of money and property, as well as organizational and administrative experience. Heads of the guilds became heads of town councils, mayors, sheriffs, and more.

One of the ways a local official proclaimed his rank was by wearing a badge of office, or jewel, on a chain around his neck. This practice survives today. Masonic lodges do the same thing to identify their officers, carrying over this old guild tradition. Masonic jewels of office are symbolic (naturally).

Every lodge is required to have a Worshipful Master, a Senior Warden, a Junior Warden, a Senior Deacon, a Junior Deacon, a Treasurer, and a Secretary.  Masonic officers are generally part of what is called a progressive line, also known as "going through the chairs." It is a line of succession that moves up one position at a time from one year to the next. When a man is appointed to the Junior Steward's position, in a perfect set of circumstances, seven years later he will be Worshipful Master.

In the ideal lodge situation, each man simply advances each year, learning each position's duties and a portion of the Masonic ceremonies. By the time he becomes Worshipful Master of the lodge, he has sat in every chair except, perhaps, the Secretary and Treasurer. He has learned public speaking, management of a volunteer organization, decorum, and responsibility. And eliminating the annual popularity contest for election that many groups suffer results in a smoother, friendlier line of succession. Any man, regardless of his social, business, or economic position outside the lodge room, may aspire to be Master of his lodge.

The Worshipful Master sits in the east, symbolic of the rising sun, and presides over the lodge, like a president or chairman. Even if the building faces the wrong direction, the Master is said to be "in the east." While serving his term as Master, his word is final over the actions of the lodge. He is also responsible, as the ritual instructs, for "setting the Craft to work and giving them good and wholesome instruction for their labor." He presides over business meetings and the conferral of degrees.

The Master's jewel of office is the right angle of a square, a stonemason's tool used for checking the angles of cut and smoothed stones. It is not a measuring square, like carpenters use. It's used to make certain an angle is "true." It symbolizes virtue.

Masons call the man in charge of the lodge "Worshipful Master," but that does not mean they "worship" him. In parts of England, mayors and judges are also called "Worshipful" or "Your Worship." This is a term of honor, from the original intent of the word, meaning, "to give respect." French Masons use the word Venerable for their Masters.

The Senior Warden sits in the west, symbolic of the setting sun, and assists the Worshipful Master in opening and closing the lodge. He is the second in command, like the vice president, and if the Master is unable to attend the meeting, he may open and conduct business.

His ancient duties were to pay the Craft their wages and to handle disputes among the workers. These days, he's just a heartbeat away from the east, so his task is to support the Master and to prepare himself for that office for the following year.

The Senior Warden's jewel of office is the level, a stonemason's instrument used to check the level of horizontal surfaces. It symbolizes that all Masons meet on the level, without regard to social, political, or religious status.

The Junior Warden sits in the south, symbolic of the position of the sun at midday. Because he represents the sun at lunchtime, he metaphorically supervises the Craftsmen when they're at recess, or refreshment. He is the number-three officer in the lodge hierarchy, and he also may open the lodge, if the Master is unable to attend the meeting.

The Junior Warden is often in charge of arranging meals for the lodge, and the Stewards traditionally act as his assistants. One of the Junior Warden's symbolic jobs described in the ritual is to make certain that the members "do not convert (their) refreshment into intemperance or excess."

The Junior Warden's jewel of office is the plumb, a stonemason's instrument used for checking the alignment of a vertical surface. It symbolizes upright behavior among Masons.

The Senior Deacon sits to the right of the Worshipful Master. He is the Master's messenger and does lots of walking. He welcomes and escorts both visitors and new candidates into the lodge and usually introduces distinguished visitors. During degree rituals, he is the guide for the new candidate, conducting him around the lodge room. In the opening and closing ceremonies of the lodge, the Senior Deacon opens and closes the Bible, and lights or extinguishes the candles at the altar. He also carries the ballot box around the room when new members are voted on.

Both the Senior and Junior Deacon carry long staffs, or rods. Because they are messengers of the lodge, the rods they carry are symbolic of the caduceus, or wand, that the Roman winged god and messenger Mercury carried. The rods are topped by their jewels of office, to match the ones on their collars.

The Senior Deacon's jewel is a square and compass, with a sun in the middle. The sun signifies that his position is in the east, with the Master.

The Junior Deacon sits to the right of the Senior Warden, guarding the door to the lodge. He is the messenger of the Senior Warden, as well as the lodge "doorman." It is his job to be certain the Tyler is guarding the door on the outside, and he allows visitors to enter, after they've been properly vouched for. He and the Tyler communicate with each other by knocking back and forth on either side of the closed door.

Because the Stewards are the low guys on the totem pole of the officers' line, they do much of the grunt work. They're the Junior Warden's assistants, and they help to set up the lodge room. They prepare all new candidates before entering the lodge for their degree rituals, and escort them to the lodge room, where the Senior Deacon takes over.

The Stewards, like the Deacons, also carry rods, in imitation of England's Lord High Steward's rod in the House of Lords. The rods are also topped with the jewels of their offices.

The Stewards' officers jewels are the same: a cornucopia, or "horn of plenty," symbolizing — what else? — lots of food. Masons love to eat and will find any excuse they can to have a breakfast, luncheon, or dinner to commemorate just about anything.